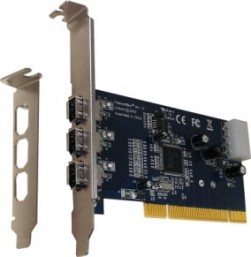 The included metallic bracket of Fireboard-Blue can be changed to a low profile size corresponding to 2U height.

You can connect a multiple array of external FireWire devices such as CD-R/W or DVD drives easily. Just plug-in any SBP2 FireWire External Hard Drive to the installed Fireboard-Blue™ adapter and immediately add storage to your PC.
Fireboard-Blue has been thoroughly tested to operate seamlessly with a big range of External FireWire Hard Drives as well as any third party external storage devices.

Fireboard-Blue can connect up to 4 Digital Cameras in a peer-to-peer topology. Using Unibrain’s Fire-i™ Software you can connect up to 4 Fire-i™ cameras and simultaneously control and display all of them, thus providing the perfect monitoring home/office solution.

Simply connect any DV Camcorder to your PC via Unibrain Fireboard-Blue PCI Host Adapter. Capture, produce and share your digital video, with any digital video application from your PC.

Unibrain’s FireBoard Blue™ Host Adapter brings high-performance IEEE-1394 technology to PCI systems. Based on the Texas Instruments TSB43AB23 device, an integrated 1394a-2000 OHCI PHY/link-layer controller, provides high performance serial connectivity. The TSB43AB23 is capable of transferring data between the 33-MHz PCI bus and the 1394 bus at 100Mbits/sec, 200Mbits/sec, and 400Mbits/sec. FireBoard Blue™ provides three 1394 ports that have separate cable bias (TPBIAS) and PCI bus master bursting, capable of transferring a cache line of data at 132Mbytes/sec after connection to the memory controller. Because PCI latency can be large, deep FIFOs are provided to buffer the 1394 data.

12V DC – CAUTION: additional power supply voltage on the Firewire bus should be equal to 12V

The FireBoard Blue™ card has excellent performance as a network card used with Unibrain’s FireNet™ application.

Extensive tests have been performed using workstation PCs equipped with Pentium4 at 1,7GHz, with 256MB SDRAM, ASUS P4B 266-C motherboard and Western Digital 40GB HDs. TCP/IP protocol was used for the network interconnection of the PCs.

All the benchmarks were conducted in a Windows 2000 environment.

Two kinds of tests were performed :

The results were as follows :

[1] Netio can be obtained for free from: ftp://ftp.leo.org/pub/historic/comp/os/os2/leo/systools/

Extensive tests have been performed using one workstation PC equipped with Pentium 4 at 1,7GHz, with 256MB SDRAM, ASUS P4B 266-C motherboard and Western Digital 40GB HDs. All the configurations were conducted in the Windows 2000 environment using Unibrain’s Fire-i™ application. Moreover no external power was needed for the cameras or the FireBoard Blue™ cards.

FireBoard Blue™ OHCI has successfully passed the EN 55022 (Emissions Environment) and EN 55024 (Immunity Environment) EMI test procedures. Subsequently, this product is fully CE compliant and assigned with the CE mark. Moreover the board is FCC compliant.