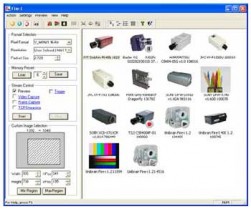 The Fire-i API™ SDK provides developers with all the tools they need in order to develop and debug professional applications for IIDC 1394 Digital Cameras. Fire-i API™ includes in one product both MS Stack driver and ubCore™ 1394 driver based SDKs, allowing the developer to choose the most appropriate tools for his project. Same licensing scheme is valid in both environments.

Fire-i API™ operates with Unibrain’s or any third party 1394a or 1394b OHCI PCI/PCMCIA compliant adapter, or any Desktop/Portable PC with built-in firewire support.

For non-Unibrain cameras, permanent operation requires the use of a Product Key or a Hardware License hosted in a Unibrain adapter. 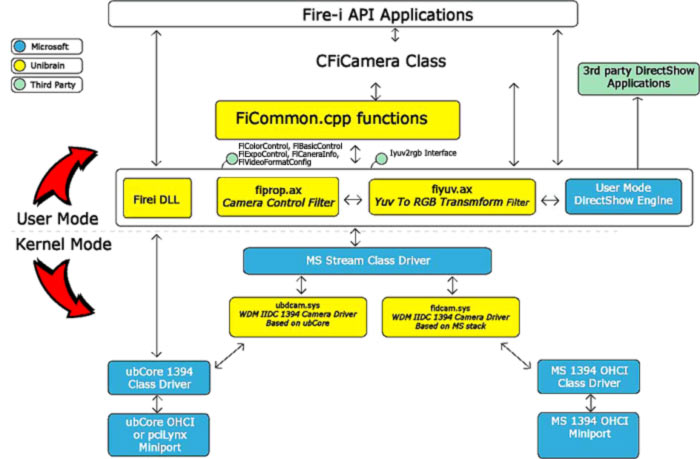 These versions were released in order to fix all known bugs, no major changes in features neither in the Fire-i API™ architecture

Any application developed with FireAPI™ or Fire-i API™ or Fire-i X™ SDK requires a license of the runtime drivers and redistributable software. Unibrain offers a variety of licensing options and customers can chose the one that is most applicable for their system.
The main concept behind the licensing, is that the drivers ‘activate’ (license) each firewire adapter or firewire camera that is attached on the system and is running the Unibrain software. In detail:

(a) Software licensing: Software licenses are in the form of product keys which activate the drivers per camera or per firewire adapter (customer choice). The GUID (Globally Unique Identifier) of the device must be provided to Unibrain and then we will return to the customer the activation code.
The device GUID can be obtained from Fire-i or FireAPI authorize utilities, as the picture below shows:

A separate product key is required for each 1394 adapter (or 1394 camera) that has the ubCore or Fire-i drivers installed.

(b) Hardware licensing: Hardware licenses are in the form of special versions of Unibrain’s PCI or PCI express firewire adapters, which embed a license. Applications running on top of those adapters will be fully functional and no product keys are required. Any device (including IIDC firewire cameras) that is connected on a Unibrain licensed adapter will also operate in licensed model.
A hardware license is also embedded on every Unibrain IIDC firewire camera. Below you can see an example from FireAPI™ authorize utility running in a Unibrain licensed adapter: 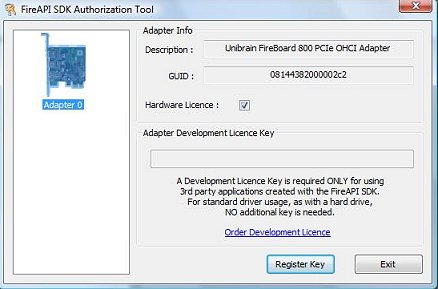 Software or hardware licenses can be purchased online or by contacting Unibrain and its distributors or resellers. Volume license discounts apply and special OEM programs are also available. For more information please contact us at: sales@unibrain.com.